Flower Mound is located 28 miles northwest of Dallas and 25 miles northeast of Fort Worth. 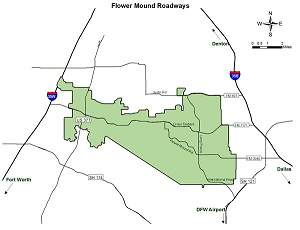 
Flower Mound's major intersections and their traffic counts are, as follows: 2019 Traffic Count Map (most recent)


In February 2013, Denton County and the Town of Flower Mound announced that the Texas Department of Transportation (TXDOT) in partnership with Denton County and the Regional Transportation Council (RTC) will be funding the extension of FM 2499 from SH 121 North to Denton Creek at an estimated construction cost of $90 million. Improvements will include additional capacity and grade separations at Stars and Stripes and Grapevine Mills Drive. This section of FM 2499 is part of the original scope of the DFW Connector. TxDOT has entered into negotiations with NorthGate Constructors to include this section of FM 2499 into the current Connector project. Negotiations are expected to be completed by summer 2013 with construction lasting 24 months. Additionally, TxDOT anticipates a July/August 2013 letting for improvements to SH 121 from the Sam Rayburn Tollway (SRT) to SH 114 at an estimated construction cost of $80 million. Improvements will include additional capacity throughout the limits of the project. The Town will continually update the Roadway Construction page to include the latest information on the FM 2499 expansion project.