The Gibson-Grant Log House will be open to visitors on Friday, Nov. 25 and Saturday, Nov. 26.

Apply to Be a Docent

If you’re looking for a volunteer opportunity, consider applying to be a docent at the Gibson-Grant Log House in Flower Mound! Anyone with a passion for preservation and local history is encouraged to apply. No prior docent experience is needed, and your commitment can be as little as one shift every two months. Training to become a docent at the log house consists of an orientation session and a shadowed shift. If you have questions, please call 940.349.2854. To apply to be a volunteer, visit www.flower-mound.com/volunteer. 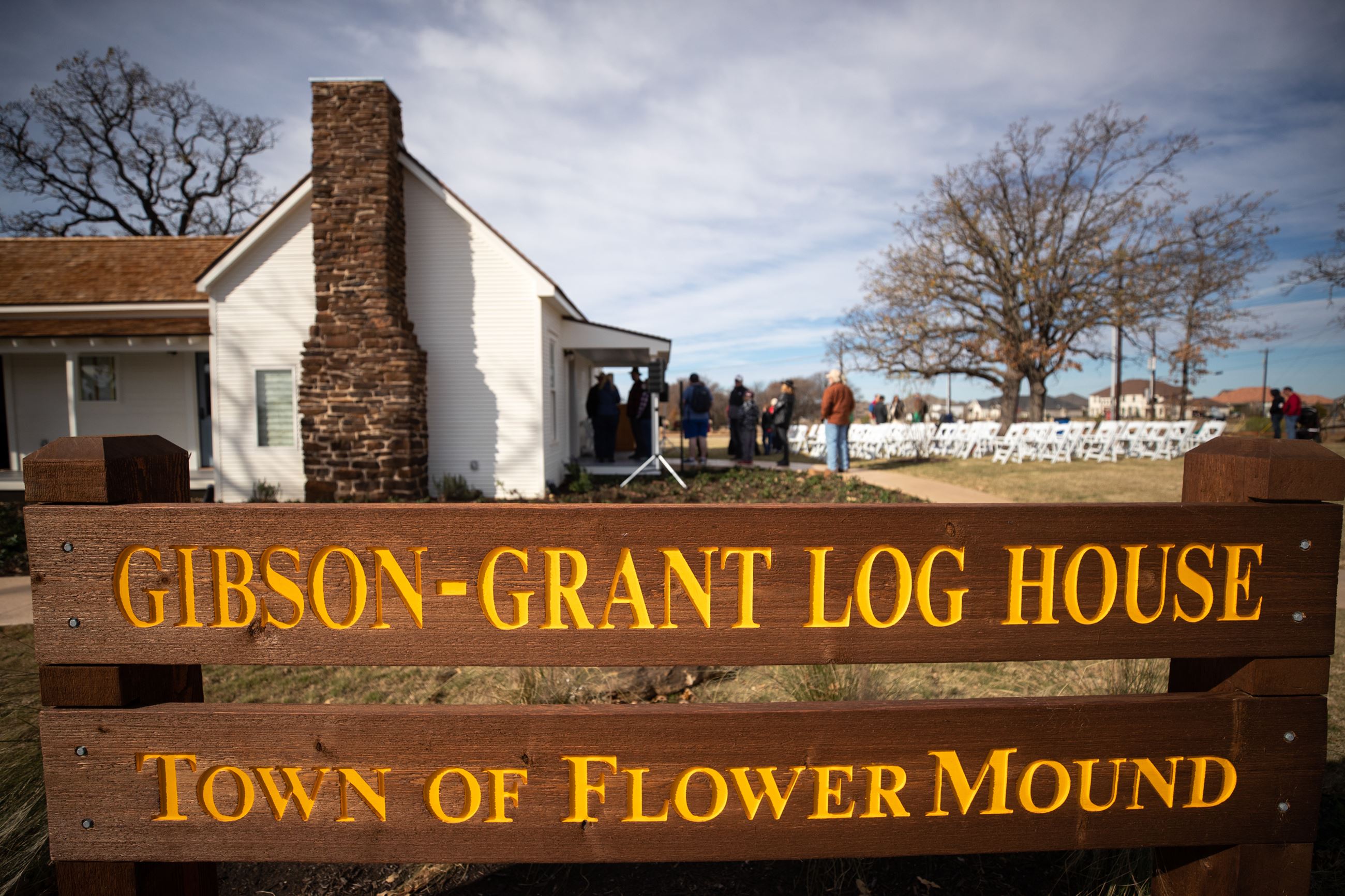 In 2015, the Town of Flower Mound acquired the property, which was named in recognition of its original owner, William Gibson, and of Curtis Grant, the developer who discovered the structure. Grant had originally purchased the property with the intent of demolishing the existing house and subdividing the lot for residential development. However, he discovered the historic log house inside the living room walls. Newer construction had been built around it in stages. He contacted the Denton County Office of History and Culture to report his findings, and upon further investigation by both that Office and the University of Arkansas Tree-Ring Laboratory, it was determined that the house was likely built by settlers who came to Texas as part of the Peters Colony, the earliest settlement in Denton County. The Tree-Ring Laboratory took core samples of the logs and remaining chinking and determined that the logs had been cut between 1857 and 1860. They had been stockpiled awaiting construction, which occurred between 1860-1861. Records showed that the property had been a land grant from the Republic of Texas, settled by William Gibson of Missouri. Gibson was the first resident of the small cabin; at 16 feet by 16 feet, it was added on to over the years as lifestyles evolved.

In 2018, the Town of Flower Mound approved a Master Plan for the Gibson-Grant Log House, to guide the restoration of the historic house. The plan also included preservation objectives, treatment standards, and recommendations.

The Town began restoration work on the log house in 2020. The structure has been restored to its Phase 3 period, or Triple-Pen form with back extension, which retains the early historic changes to the original Single-Pen house. Restoration work included removing concrete and gravel driveways, regrading the site to improve drainage, constructing an independent restroom facility, removing non-historic board and batten siding and plywood, removing non-historic wood front porch and concrete utility room stairs, reinforcing and installing a wood shingle roof, infilling historic walls, exposing a portion of the log walls to showcase earliest construction, and finishing spaces with period-appropriate finishes and artifacts. Moving forward, the Town of Flower Mound will maintain the Gibson-Grant Log House and its grounds, while Denton County will furnish the interior of the house and will assist with volunteer recruitment, training, and staffing for scheduled tours, special events, and days when the historic house is open to the public.

The Gibson-Grant Log House provides all of us with the unique opportunity to travel back in time, experience life on the Texas frontier, and get a glimpse into how some of Denton County’s earliest settlers lived.

The Log House has been restored to its Phase 3 period, or Triple-Pen form with back extension, which retains the early historic changes to the original Single-Pen house. This also preserves a large portion of the original siding and paint layers. The benefit to choosing the Phase 3 period is that it displays the evolution of early Texas houses on the frontier, while leaving room on the property for outdoor activities and events.

The decision as to what period of significance the building should be restored to was extensively discussed during the Master Planning process with all the participants involved in this effort: the Texas Historical Commission, the Denton County Office of History and Culture, the Town of Flower Mound, Town Council, and the Community Services Department, along with significant involvement from the community and local history groups. In summary, the log house itself unfortunately had too little historical integrity left due to the multiple additions that had taken away much of the historic fabric. The front and rear wall of the log house had almost no logs remaining, and the roof and sleeping loft had been completely removed when the first addition was built, leaving little more than two log walls remaining – all of which were preserved (you can see sections of the logs from both the inside and outside of the house, preserved inside windows). Aside from the lack of historical integrity of the log house, it was agreed by all parties that participated in the Master Planning process that the most important story to be told was the evolution of the lives and the dwellings of the early settlers over time, along with preserving what remained of the log house for future generations by not leaving it exposed to the elements.

During the renovation process, the following changes were made:

The Town extends its gratitude to the Curtis Grant Family, the Wendell Elms Family, and the Ray Robbins Family for the gifting of the Gibson-Grant Log House. We would also like to extend our gratitude to the State of Texas, Senator Jane Nelson, Denton County, Former Council, and Town Staff involved in the conception, funding, design, and construction of the house.